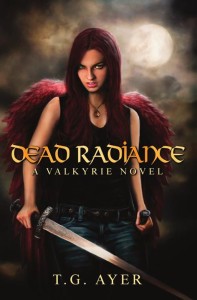 Dead Radiance is the first in a series of five books in the Valkyrie series, written by author T.G. Ayer who brings to life the story of Bryn Halbrook, believed to be the reincarnation of famous Valkyrie, Brynhildr, a creature of myth.

Bryn Halbrook had always seen the glow on the people around her. And she knows all too well what psychiatrists do to people who claim impossible powers. She’s always stayed below the radar, but when she discovers the meaning of the beautiful auras, she’s not sure why she was cursed with the ability to see the soon-to-be-dead and be unable to do anything about it.

But Bryn is on the brink of the unbelievable truth – she is a creature from myth. Valkyrie- a warrior maiden of the God Odin. And a Collector of Souls.

Aidan Lee just can’t do what he’s told. Visiting Craven was not supposed to be a time to fall in love. He’s just helpless when faced with the beautiful Brynhildr, but there is more to the biker dude that either Bryn or Aidan himself knows.

Can their fledgling love survive the secrets and intrigue, the reality of Odin’s realm of Asgard, the pressures of being a warrior of the gods,

But Bryn lucks out when the Trickster god Loki sets his sights on her. Can Bryn hold her own against the charmingly manipulative god long enough to discover what Loki is really planning?

I was totally entranced by this book from the moment I started reading it, finding it hard to put down. Bryn is unlike most teenagers her age, whilst most try to fit in and find their niche in the schoolyard cliques, she never really cared. What was the point of trying to fit in, when she’d only be uprooted and have to do it all over again at the next school.

Bryn has been moving from foster home to foster home since her father’s death, fitting in just wasn’t possible when you were a ward of the system. Her life is turned upside down when the only friend she did have was killed in accident and she survived. Already labelled a freak, the whole town of Craven were against her now.

Enter Aidan, the latest kid to join her foster care family. He’s the complete opposite of what a foster kid’s life should be like, instantly fitting in at school and popular to boot. Their attraction to each other is instant too. Bryn doesn’t need or want more complications in her life.

From here the story really starts to get interesting, and soon both Bryn and Aidan are thrown into a world that neither believed could ever exist.

Whilst Dead Radiance has an element of romance to it’s story, it’s also full of adventure and action, and we soon discover that Bryn is none other then the legendary Valkyrie known as Brynhildr, reincarnated. As soon as Bryn enters Asgard, her world changes completely.

Upon receiving her wings, she is then thrown onto the fields to train with the legendary Fenrir, other Valkyries, Warriors and Ulfr’s’ preparing for the upcoming war, the battle of Ragnarok.

Without going further into the storyline, and not wanting to give any spoilers, I thoroughly enjoyed reading this book – I literally could not put it down. I became attached to the characters almost straight away, the attachment strengthening as the story evolved. There was a lot of intense moments, and moments that pulled the emotional strings.

It was great to read a story where the main character was a kick [email protected]@ female, strong in both spirit and strength, and Bryn pulls you into her story, the moments of happiness, and moments of tragedies, it was hard not to feel for her as she fights for and against Gods and Goddesses, Dragons, Frost Giants and even Valkyries alike.

She may have left Midgard behind her, but Asgard has it owns enemies set out to destroy her, it’s hard to know who to trust.

The story ends on a cliff hanger that will literally have you hanging for the second book in the series! My only disappointment was coming to the large page, knowing I’d need to my hands on the second book ASAP!

You can purchase the book here – all five books in the series are available for purchase.