A LOVE LETTER TO BRISBANE

Brian Craddock is the author of Eucalyptus Goth, a new book from Oscillate Wildly Press being launched at Netherworld in Fortitude Valley on Saturday 21st at 10am. Outback Revue spoke with Brian to learn a little more about the book. The book can also be bought from Amazon or Book Depository (Australian readers can get free shipping on BD).

Outback Revue: What is Eucalyptus Goth?

Brian Craddock: The book is set in Brisbane, in 1996. Almost no-one was using

mobile phones or internet. A lot of people still listened to cassette tapes. DVDs wouldn’t be sold in Australia for another three years. Set against this are some friends, nearly all of them goths or swampies (which is what a lot of goths in Brisbane used to be called), and we follow a year in the life of this group of misfits. But the reader doesn’t have to know much about goths to still enjoy the book. At heart, it’s about the psychology of a group of humans, who just happen to wear a lot of black.

The very first words for the book were actually written in 2001. About two pages worth. I rewrote it in 2005, and besides a house in the book called The Prozac Palace, the only remnant of that effort is the title Eucalyptus Goth.

OR: What inspired the book?

BC: You know those stories of our hey-day that we all tell as we get older? That’s what inspired it, mostly. It was about capturing the essence of that time. We had a lot happen in 1996. There was the Port Arthur massacre. John Howard got into Government. There were changes to immigration and to refugee policies that saw them left without resources. Pauline Hanson gave her maiden speech to parliament. We even had some space junk nearly wipe Brisbane off the face of the map, not that it’s widely known. So this is my love letter to Brisbane.

BC: Yep. America called Howard who called our Premier. They were getting ready for a massive full-scale disaster. But it landed in the ocean instead. It’s also in the book.

OR: A lot of the characters in the book seem to be involved with mental health in some way.

BC: Sort of, yes. In a funny way, nearly all the main characters are afflicted one way or another, even if they don’t realise it. They’re written that way, but not necessarily defined that way. Those that are talk about what it was like back then.

OR: The experiences of the characters are personal experiences, I gather?

BC: You’re spot on. It’s interesting, because while I was writing the book I got into a conversation online with some people who revealed a rather startling contrast to my own experience – and that of others I had known back in the 90s – within the mental health arena. I don’t know if they’re more sensitive, or times have changed, or I was fortunate, but I decided to try and address that in the book. Have the diverse characters experience the same process quite differently.

OR: Could you tell us about some of the characters?

BC: Well, there’s Dante, who’s eminently likeable. He gets along with people well. But the thing is, he always carries a knife, can fly off the handle easily, and likes to shoplift. So he’s a character that creates that moral conflict in the reader. Conversely, his best friend Twix is a bit hard to digest. He can show racist and homophobic tendencies, though he tends to keep them under wraps. But as a security guard he’s implausibly law-abiding. He’d never think of stealing something. So as friends, those two are like chalk and cheese.

There’s also Alex, who moves to Brisbane from Melbourne. She wants to see the good in everyone, but the circle of people she chooses to befriend are making that a tad difficult for her. Alex is like a see-saw: she reacts to the world emotionally and rationally with equal measure. But that’s her undoing, see? She wants to be good, but she judges the world around her with the wrong set of tools. Her friend Abi has no issues with this. Abi knows what she wants and goes for it, even if that means developing addictions to whatever’s at hand. But the one thing Abi shares with Alex is a healthy dose of denial. She honestly thinks she’s not addicted to all the wrong decisions.

If any character was prone to wrong decision making, though, it’s Pixie. She’s the babybat of the group at fifteen. She’s petulant and rude and obnoxious, and barrels into a life away from home with a group of heroin addicts. Pixie chases the thrill of danger, but I don’t think she’s a true addict like Abi is. But that doesn’t mean where Abi is just keeping her head above water Pixie isn’t drowning. Nup. Pixie falls hard.

BC: It’s what drives the book, actually. It’s very character driven. It’s about plunging into their world, seeing a side to Brisbane maybe a lot never experienced in the 90s. There are the goth and punk scenes, there’s skinheads and metal bands. There are psychiatric appointments and living homeless. The reader is taken into court-rooms, junkie dens and psychiatric hospitals. There’s a lot to explore in Eucalyptus Goth.

OR: It’s Queensland Mental Health Week at the moment, so this seems like a timely release.

BC: I think a lot of people will identify readily with the characters, and the subject matter. I’d like to think that the institutions charged with assisting our mentally unwell could appreciate the book, too. That’d be nice. 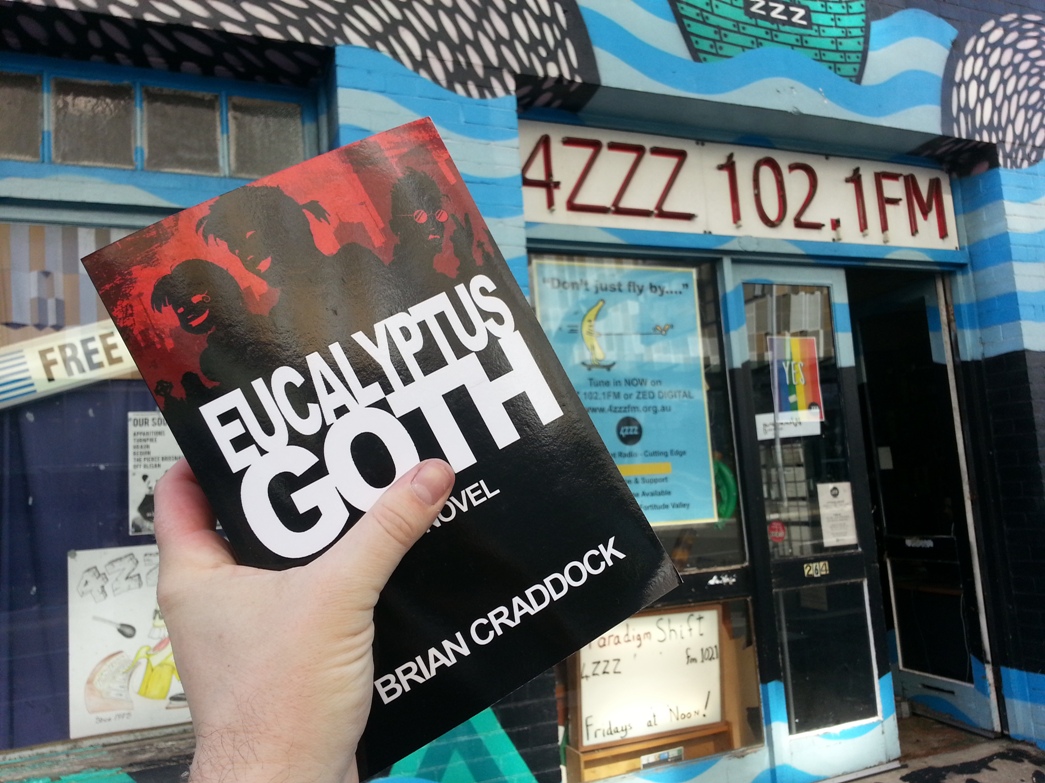 OR: Thank you very much for talking with us, Brian.