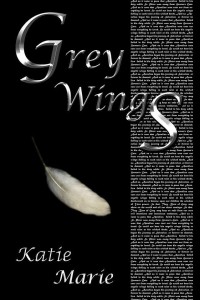 Grey Wings is written by author Katie Marie – it is one of three separate books she currently has out on the market. I’ve been advised she is working on the sequel to this book (and it may become a trilogy as well).

Jason is stranded in a dark city, and is in desperate need of help when he has no idea how he will get home. So, when he collides with Aurelius, an Angel only in the mildest sense of the word – who has committed a crime worthy of great punishment, but has been handed a rare chance at redemption – Jason can see a way home. However, their journey will be hampered by Fallen Angels, Earth Spirits, and Griffons – and none can say if everyone will make it home.

If you’re looking for a quick and entertaining read, then this book is for you. Aurelius captures your attention from the start, and doesn’t let go – even before he became a Fallen Angel.

I found this a rather interesting take on what Heaven is like (and couldn’t help but find myself siding with Aurelius on some of his opinions here).  Souls (humans) have essentially taken over Upstairs – I won’t go in detail here, as I really don’t want to give any spoilers.

Jason is another engaging character for someone so young, and appears to be the key to Aurelius returning Home.  He also appears to be wiser than most kids his age.

What happens next is a constant struggle with Aurelius’ dislike of Souls and his having to spend time on earth with them.  I enjoyed watching his struggle as he tried to come to terms with his punishment for the crime he committed, and watching him evolve through the story.

There’s fight scenes too as other Fallen Angels try to dissuade Aurelius in his quest to return home, his friendship with another Fallen Angel who resides in Hell, as well as Earth Spirits and Griffons set out to destroy either Jason or Aurelius. Will Jason make it home? Will Aurelius make it back to Heaven?

If you love books about Fallen Angels, Demons and other light or dark creatures, I’m sure you’ll enjoy reading this. It was over a little too quickly for me (I’m selfish – I wanted more time with Aurelius!) but I’m excited to hear that the sequel is currently being written and I’ll get to catch up with him soon!

You can purchase the book here (in either e-format or print).