I’d been wanting to go here for quite some time now. The French Patisserie was established in 1984, and fans of Brisbane author Nick Earls might think it sounds familiar, since it was in his novel Zigzag Street. So this morning I dropped in for some breakfast.

I had a vindaloo pie, with a nice crunchy pastry lid and a spicy filling. Full of flavour. 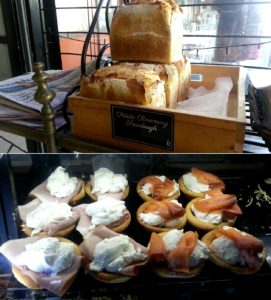 The store has a variety of foods on offer: hot stuff like pies and sausage rolls, petit fours, whole cakes, breads and rolls, breakfast foods and toasties, quiches, danishes and sweets.

There was even a Potato and Rosemary Sourdough on offer.

Prices for each product vary but the eggs benedict are $9.50 each. More options can be viewed on their Facebook page.

Next on the menu was a massive apple and custard danish. I normally steer clear of apple in custard in any dish, but something about the look of this danish appealed to me. I’m glad I took the plunge: the apple flavour/texture was subtle, and the danish proved to be wonderful.

I’m not a fan of macrons (except to photograph), but the other half is so I got he 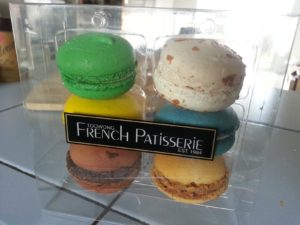 r a set of 6. Made sure there was at least a salted caramel one and a hazelnut one in there. Her opinion is that they are some of the better macarons she has had in Brisbane, almost comparable to the popular La Belle Miette in Melbourne. Her only misgivings were they’re “a bit airy” in the centre (hollow, in other words). Thumbs up for the macarons.

So we’re impressed with Toowong French Patisserie. It’s a good source of quality baked goods on the Western side of Brisbane if the likes of Flour & Chocolate in Morningside is too far to travel to.