So the unimaginable happened recently. My partner, who isn’t really big on eating out but knows I LOVE it, decided to shout me to dinner at a restaurant of my choice for my birthday! I love trying out new places and different styles of cuisines, but I wanted to make sure that whatever place I chose, he’d like it as well.

I was kind of lost as to what restaurant to chose from as I wanted to try out a place I hadn’t been before… so I took the vote to facebook and got my friends to recommend places for me. I’m so glad I did as a girlfriend suggested a quaint little place in the heart of Southbank. I knew just by looking at their website that is was the right choice for us!

Matt had spent time abroad years ago living in America, and he’s often told me about the food and his various adventures there. South Side Diner is set up as an American 50’s style diner – the pics alone on the site appealed to me, and so did the menu when I looked that over too! I knew this was a place we’d both enjoy!

We started off my birthday seeing the movie “The Secret Life of Walter Mitty” before heading over to the Diner. We got a little lost on the way (street numbers are a little out of whack in Grey Street)… but finally found the place.

South Side Diner is quite a quaint and quirky place, lots of American memorabilia as well as 50s music playing inside. We were seen to straight away and taken to our seat. I must say – I absolutely love their menu designs here – very simple design, but quirky (and I thank the lovely waiter who let me take one home as a momento!) 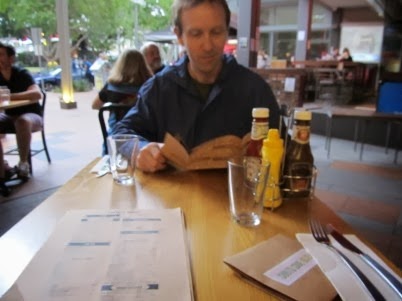 Part of the experience is in trying things new, so I opted for the Brooklyn Lager as my beverage of choice – it was bitter at first, but after a few sips it grew on me.

Next up – the mains! I was indecisive about what I wanted – sooo many different things to choose from, but settled for the Reuben Sandwich in the end – and I was NOT disappointed in that choice! As a lover of corned beef (or silverside as it’s known here), I use to hate that mum would only put one slice on the sandwich (I could easily eat corned beef on its own and lots of it).

The sandwich comes with sauerkraut and melted swiss cheese, and a Brooklyn dill pickle on the side. I was hugely impressed when my sandwich arrived – the photo does not do justice to the heaven that awaits you. In true American style – that corned beef was PILED on and I couldn’t have been any happier!!!

Matt chose the Buffalo Wings (served with celery sticks and blue cheese sauce) and a side of Big Fries with chicken salt. Again, the pictures just do not do justice here. You can’t really see it – but those buffalo wings were HUGE!!!! And spicy as hell – I only had one but I could feel the heat! Matt orignally ordered a serve of 20 buffalo wings, but was talked into going for 10 and just as well! Unlike the Buffalo wings you get elsewhere – these are the traditional styled American version and of mammoth proportions!! Delicious too! Those fries were pretty huge too!

Dessert was… Pumpkin Pie. I have NEVER seen Matt savour anything as much as this pie! If only I had managed to get a shot of his face at the first bite of the pie – it was priceless! We shared this together, and probably just as well, as surprisingly it’s rather rich – but decadent too. It’s served with Maple Cream and Roast Pumpkin Ice Cream. I soooo need to find that ice cream – it was devine!! The texture in it set off the taste beautifully, and can easily say that it’s something I’ll go back for again… and again… and again! 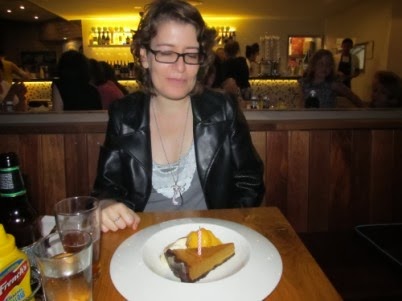 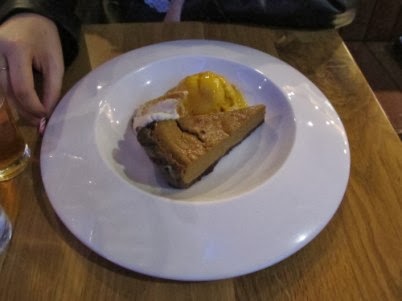 This has probably been one of my most enjoyable nights eating out. The food was superb, the customer service given to us was friendly and attentive, and the atmosphere was fantastic! If you haven’t been to South Side Diner, do yourself a favour and try out some traditional American food. You won’t be disappointed! I’m happy to say, that we’re now booked in for Valentine’s Day (and pretty sure Matt has intentions of going back again and again and again – I’m pretty sure  the pumpkin pie is the draw card for him).

Check out their website for the menu and various American style events they hold throughout the year – I’m looking forward to going back for Thanksgiving (a holiday I think should be adopted here, so it’ll be great to experience it firsthand – even if technically I’m not “in” America at the time).

(Post Edit – we went again for Valentine’s Day, sadly on special event days they have set menus, so you won’t be able to choose from the normal menu – pumpkin pie wasn’t included on the list for dessert this time, but I’m looking forward to going back again for “Thanksgiving Day” – as I know pumpkin pie will be on the menu then as it’s a favoured dessert for that time of the year, and I’ve always wanted to experience Thanksgiving anyway he-he).

Visit their page to find out more: South Side Diner